A while ago, I compiled a top ten of the best cards in Aether Revolt for Gentry. There was plenty more ground to cover, however, so I decided to write a follow-up article. Let’s take a look at some of the other cards I suspect may feature prominently in Gentry during the months to come.

Why don’t we start off by pointing out the major omission in the original article. In fact, I did originally intend to talk about Renegade Map  alongside  Unbridled Growth (which did make the original top 10 list). Both are cheap, efficient Delirium and Revolt-enablers at common, so it only made sense. But since I decided to limit myself to exactly 10 cards, and not one more,  Renegade Map got the axe. Let’s put things straight. It should have been the enchantment instead. I suspected both of these cards would mostly find homes in lists revolving around Delirium or Revolt, and figured both of those decks would lean towards green. Since Unbridled Growth should usually be the better “green” card (it cycles at worst, while  Renegade Map  only gets you a land), I decided to give it the nod over  Renegade Map . That was wrong.

I underestimated how valuable the colorless manafixing would be (it functions much like Evolving Wilds, a premium card in the format) for many non-green decks, as well as its synergy with Improvise. Both of these clearly push  Renegade Map ’s range beyond that of  Unbridled Growth . This card will not be a powerhouse by any stretch of the imagination, but it will see plenty of play because it’s cheap and fulfills so many roles. I think it should have made the Top 3, at least.

A less reliable Mana Leak at common is still a good deal. In an artifact-heavy deck like the one I played at the Invitational playing a cheap threat and then countering your opponent’s play with just one mana is game-swinging, and based off of that, I predict Metallic Rebuke should be a mainstay in control and tempo decks that play a large amount of artifacts. I would not recommend it for normal control strategies though. When you keep up three mana and they play around it, it will feel very bad, and you will wish you had something like a Void Shatter instead.

Back when M15 was legal, Ensoul Artifact was an extremely powerful card that found its way into a blue-red Standard deck and even won a Pro Tour. I wasn’t a big fan of the card in Gentry, however. The deck lacked a game-plan when you didn’t draw the Ensoul Artifact by turn two or if your opponent had meaningful interaction for your early artifact creatures. (The Standard deck played many rares like Hangarback Walker to mitigate this, but Gentry decks obviously cannot rely on such a solution.) On top of that, it had to give up several uncommon slots to cards that otherwise did nothing, like Ornithopter. I don’t like playing inconsistent decks in Gentry, and Ensoul Artifact was the epitome of a high variance list. With Tezzeret’s Touch, we have a new, albeit slower variant of Ensoul Artifact in Gentry, and this time, I do like it in the format. Improvise provides plenty of power to an artifact-based strategy and makes sure that you are not solely reliant on just drawing the Tezzeret’s Touch, and there are way more cheap good artifacts around (at common even!) than there were in M15. Playing Tezzeret’s Touch on a non-creature artifact means that it is hard to interact with outside of some of the black removal (Fatal Push, Murder, Unlicensed Disintegration) and the fact that the artifact comes back when it is destroyed makes for far less two-for-ones, usually the main disadvantage of playing powerful auras. The power level is high and the support is there, so I expect Tezzeret’s Touch to be very good in Gentry. The only thing that kept it from the Top 10 is the fact that it only fits one specific deck.

Renegade Freighter was perhaps the most groan-worthy card in Kaladesh limited, often finishing games in two or three swings. Good limited cards often transition well to Gentry, and that turned out to be true for the “Pain Train” as well, anchoring the different Vehicles archetypes. Untethered Express, fortunately, is an uncommon, but it may be even more oppressive. Its insanely low crew cost of just one means that the “Dino Train” (take a good look at the artwork) gets crewed by even lowly servos while its higher toughness means that it is harder to kill, and like Raging Ravine, it just keeps growing bigger and bigger, providing an often insurmountable advantage. While I do believe this card is powerful even in Gentry, I expect the fact that is costs four instead of three will be a big deal breaker. It really bumps up the curve, and will require aggressive decks that want to play it to play more lands, neither of which is ideal for an aggressive build. One way to get around this is Speedway Fanatic, effectively turning your Express into a bigger, badder, and therefore better Ovalchase Dragster. Bram De Keukelaire was already seen using this interaction to good effect. Just one way to give it haste still lacks a bit of consistency in my book, however. I’d also be interested to see if there is a more midrangy shell (perhaps black-white with a lot of servo makers like Glint-Sleeve Artisan) that takes advantage of Untethered Express.

Before Aether Revolt, decks like BR Vehicles needed to play the less-than-ideal Eager Construct as their two-drop, just to rack up the artifact count. Now, the red-based aggro decks get access to another two-mana two-power artifact to fill the curve, and this one doesn’t allow your opponent to scry for removal. On top of that, the Welder Automaton comes with a built-in late game plan, allowing you to sit back and “burn” out your opponent one ping at a time. This card fits the aggressive decks like a glove, and is a solid role-player without taking up an uncommon or rare slot. I’m a fan.

What’s not to like? Weldfast Engineer provides a 3/3 body without any drawback, and, if you build your deck appropriately, comes with 2 hasty damage attached. That is a very good deal for any black-red aggro deck. My current build is playing 4 Sky Skiff, allowing you to curve Skiff into Engineer, which means attacking for 4 in the air on turn 3. Not too shabby. This also turns your left-over Servo and Thopter tokens (I’m looking at you Aether Chaser) into must-block threats. If you are looking for a largely unexplored aggro deck look no further than to build around this card. With it and Unlicensed Disintegreation you have a solid core to build around.

In the right deck (one with plenty of artifacts), Reverse Engineer provides 3 cards for 2 mana, and that is a deal I find hard to pass up on.

Maulfist Revolutionary does nothing spectacular, but is rock-solid in every way. It’s a 3/3 trample for 3 by itself, and with some effort, it will usually provide you with some extra power and toughness (+1/+1 counters) or energy as well. If “Aristocrats”-like decks like the one Pepijn Degryse won the Invitational with are truly back (note: I’m not entirely convinced that they are), Maulfist Revolutionary is sure to gain an increased role in GB counters decks, as it provides another trampling body (Peema Outrider is another) that works well with the theme of the deck. It is competing with plenty of other cards for the slot though, so I expect its rate to fluctuate as the metagame evolves.

As demonstrated by Pepijn this last weekend, multiple Hidden Stockpiles are very hard to beat in a game that goes long. The combination of scrying every turn while continuously adding to your board is very potent against spot removal, and hard to overcome for decks that have no trampling or flying threats. Pepijn won the invitational with an interesting Abzan list built around Revolt, but there are several other decks where this enchantment might fit. Keep an eye out for my upcoming article on my brews for the Invitational, which includes a sweet Mardu Control list that abuses Hidden Stockpile alongside Ovalchase Daredevil.

The other two-color uncommons 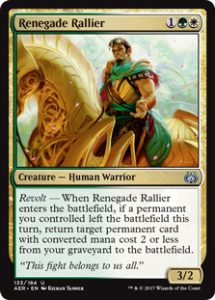 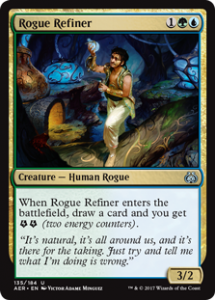 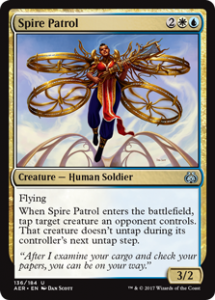 The two-colour uncommons in Kaladesh (Whirler Virtuoso, Restoration Gearsmith, etc.) were powerful, and so are their Aether Revolt counterparts. I already featured Winding Constrictor, Maverick Thopterist, Hidden Stockpile, Weldfast Engineer, Tezzeret’s Touch and Renegade Wheelsmith earlier on this list, but I need to sin against the 10-card maximul to include another three of the last four. Renegade Rallier is powerful enough to see play in Modern, so it can hardly be a bad card in Gentry. Without actual fetchlands and potent one or two mana threats, however, the Rallier is a little bit less powerful here. Still, you can use it to accelerate out another land with an Evolving Wilds (crack an Evolving Wilds on turn 4, play Renegade Rallier with your other mana, and get back your Evolving Wilds to ramp out a second landdrop), combine it with Sinister Concoction to turn it into a bad Shriekmaw (which is still good) or use it alongside Unbridled Growth to turn it into a GW version of Rogue Refiner. You can of course also just get back a decent two-drop. I love this card, and will definitely try to build around it at least once.
Rogue Refiner is a very good deal for a three mana creature, but does suffer from having so many other good energy enablers at common. I don’t expect it to see much play, despite its reasonable power level.
Spire Patrol is just a good card. It’s a decent rate flyer with a good tempo ability. Like Rogue Refiner, however, it suffers from not having a very good shell within the format. The second coming of Reflector Mage, this is not. Now, if Reflector Mage had still been legal, this would have been a very good complement, alongside the likes of Felidar Guardian. As it stands, I don’t think the UW Tempo deck can stand up to the other powerful decks in the format. The prevalence of Shock in red and Dead Weight in black also really hurt this two-toughness four drop.

Other cards I had on my longlist include good all-round removal in the form of Daring Demolition, a removal spell with high upside, but a sizeable set-up cost (and mana cost, for constructed) in Monstrous Onslaught, more very good Artificers in Aether Swooper and Sweatworks Brawler, a very good card for grindy matchups in Resourceful Return (only in creature- and artifact heavy decks though!), decent flyers with potential upside in Skyship Plunderer, Wind-kin Raiders and Airdrop Aeronauts, a great blocker and energy sink for dedicated energy decks in Shielded Aether Thief (I love this card) and a slightly overcosted yet still powerful Matter Reshaper (which was a rare of course) in Treasure Keeper.

That about does it for what I have to say about Aether Revolt. Any other cards I missed? Let me know in the comments!

See you next time,