Like I have done in the past, I will be taking a closer look at the upcoming rotation. While new sets being added to an existing block mostly tend to upgrade existing decks, rather than create new archetypes, the combination of several sets rotating out and new, exciting cards rotating in makes for a more significant overhaul, with entire decks becoming unplayable and new archetypes spawning. Rotation time is always exciting, and knowing what to expect can give you a major leg up on the competition. In two articles, I will try to provide a brief overview of my expectations on the upcoming rotation. In this first article, I say goodbye to some of the most powerful cards leaving the format, while also discussing their impact on the survival and demise of certain decks. Next week, I introduce the new and exciting world of Kaladesh, which provides new cards and strategies I am more than eager to try out. 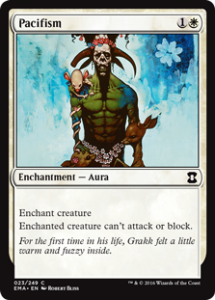 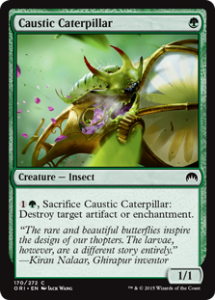 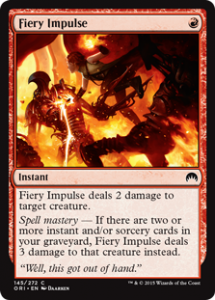 First, a quick disclaimer. A few omissions from this Top 10 may cause raised eyebrows, I know. I have my reasons, however. Mostly, they are cards that are powerful, yes, but also easily replaced. Their absence will therefore not affect the format much. Take Fiery Impulse for instance. Impulse was was one of the most commonly played and most efficient removal spells around. It would have been high on this list if it weren’t for the printing of Galvanic Bombardment, which fills a very similar role and should serve as a fine replacement. Pacifism is another such card. Powerful and commonly played, yes, but irreplaceable? No. Finally, a card like Caustic Caterpillar saw a lot of play because of Sphinx’s Tutelage, but since that card is also rotating out (spoiler much?), I do not expect its absence to affect the format in any major way. 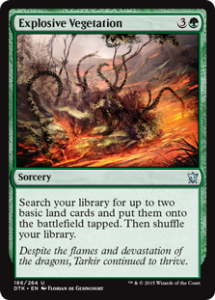 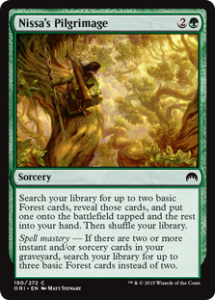 While green-based ramp was never a popular strategy, it was one of my pet decks and deceptively powerful one at that. Playing a turn 4 Dragonlord Atarka is not something many Gentry decks can come back from, let me tell you that much. With the rotation of Explosive Veggies and Nissa’s Pilgrimage, the ramp strategies lose several of their most important spells, which means the deck loses a large part of its consistency. While Servant of the Conduit is great, and we still have Hedron Archive and Natural Connection, having no second spell that ramps from 4 mana to 6 mana (like Explosive Veggies did) invalidates a lot of the upside of this strategy. I do not expect to see much ramp going forward, even if the deck is not entirely dead.

In a format largely devoid of potent two-drops at common (and even uncommon), Topan Freeblade was king. Its ability to smash in pre-Reflector Mage and then hold the ground and attack as a 3/3 all at once made this one of the more powerful early plays in Gentry, and it saw play in nearly every white deck out there, including UW Tempo, Esper Midrange and White Weenie. Kaladesh does bring along several powerful two-drops (Veteran Motorist, Thriving Grubs and the aforementioned Servant of the Conduit), but it remains to be seen if they will have the same impact Freeblade did.

Perhaps the card on this list I am saddest to see go. Thunderclap Wyvern was deceptively powerful in its flashy sneakiness, and was essential to both the Bant Fliers deck that dominated the format for a while, and the Esper midrange build I played to a semi-final finish at the previous Gentry Open Finals. While some preferred Tenacity in the UW Tempo deck, I still believe it was correct to play Thunderclap Wyvern over it, as it gave you the advantage in the Thopter mirrors. With the rotation of the Wyvern, I expect there to be less instant-speed/flash-centric decks going forward.

Cheap and efficient, Elvish Visionary is an inoccuous card that never gets cut from the decks that want it. A crucial cog in Elves, GB Aristocrats, Bant Flyers and some builds of UG Emerge, the little Elf that could saw more play than most people realize and has no obvious replacement in post-rotation Gentry, which makes it one of the most important cards rotating out.

Everything that Divination wants to be and more, Read the Bones was a mainstay in black midrange and control alike. There is no good replacement for RDB in current Standard (Live Fast is not bad, but in the absence of a black Energy deck, the two Energy is no Scry 2), so I expect black-based midrange and control decks to lose a little bit of their luster, perhaps focusing more on graveyard-based card-advantage and selection, while blue may gain some percentage points in the pure control decks.

During the course of its stay in Gentry, I must have played Reave Soul in over 50% of my decks. The rate on this card was great, as it answered both the more aggressive, cheap creatures, and several of the larger, hard-to-deal with threats, such as Vile Aggregate (just so long as you kept the rest of the board in check). I am guessing that many decks will now have to move towards Complete Disregard, which exiles and is an Instant, but also costs one mana more, which is a major difference, or Die Young, which answers a far smaller range of creatures (barring extra Energy resources).

If Reave Soul was one of the more commonly played removal spells, Duress was perhaps the most ubiquitous sideboard card. Most black decks had at least 3 and often 4 of this card in the sideboard to combat the various control decks, or to win the control mirrors. I expect the absence of Duress to have a major impact on the control decks, as forcing important spells through a counterspell now becomes far more difficult.

The build-around that spawned an entire deck. When Michael Majors won a Grand Prix with a list that was almost entirely portable to Gentry, we knew we had a player on our hands, and boy did we. A Tutelage deck made the semi-finals or finals of every Gentry Open Finals it was legal in. That’s pretty impressive. Tutelage was the reason people had 4 Caustic Caterpillars or Felidar Cubs in their sideboards, so expect those numbers to be slashed in tournaments to come.

Nantuko Husk dominated the format for long stretches at a time. First in the GB Aristocrats deck, then in the UB version, and then once more in an updated GB version. The presence of many powerful token makers made it an exceedingly powerful common, and that is exactly what Gentry decks are looking for. The departure of the Husk means that many token strategies will lose their appeal, which in turn will make having sweepers in your main deck less of a necessity. Dead Weight, which was the perfect answer to this pesky creature, loses some of its value, but because of its efficient rate, I still expect it to show up in most black decks.

If you don’t believe how powerful this card was, compare it to Kaladesh’s newest Thopter maker:Experimental Aviator, an 0/3 for 3UU that brings along 2 1/1 Thopters. Now look back a Whirler Rogue. Yeah.

Whirler Rogue is amazing, bringing stats (4 power and 4 toughness for 4 mana), resilience (spread over 3 bodies) and relevant abilities (flying, granting unblockability). Whether pairing with Nantuko Husk to one-shot the opponent in the UB Aristocrats deck, with Vile Aggregate in UR Eldrazi or with Reflector Mage in UW Tempo, Whirler Rogue was almost always the best card in the best decks, and it rightfully deserves the top spot in this list.

Moving forward, I expect Tutelage and all forms of Aristocrats to disappear almost completely. So will Elves and the BW Enchantment-based strategies, which lose their entire core in Shaman of the Pack, Dwynen’s Elite and Sylvan Messenger and Blessed Spirits and Blood-Cursed Knight respectively. White Weenie, which loses Topan Freeblade and Consul’s Lieutenant, the two best cards in the deck, may also be on the chopping block. Ramp strategies and UR Eldrazi (which loses Whirler Rogue, but gains Whirler Virtuoso, which may not be as good, but might be viable yet) will lose much of their luster, but I can see them still existing as lower-tier decks after the rotation.