This is the continuation of my tournament report, Part I of which you can find here.

Round 2 vs. Jelle Gyselinck (BW Control)

Having gotten my confidence up by beating Peter during our bye, it plummeted after I found out I was paired against Jelle for Round 2. Jelle’s WB Control deck full of Planeswalkers and exile effects (both of which are troublesome for my deck) was not the best match-up. To make matters worse, we were the feature match for that round, and so I not only had to face Jelle, but my camera curse as well. For those not in the know: I had lost all but one of my on-camera rounds over the past two years, putting me at something like 1-6 or 1-7 in feature matches. At one point, I actually played three consecutive Gentry events, going 9-0 off-camera and 0-3 on. At least I’m lucky the numbers weren’t the other way around, right? Nevertheless, if I wanted to win the tournament, I’d have to win on camera eventually. A good a time as any to get started.

The first game, I played poorly, making several decisions in the early game that came back to bite me in later turns. I should not have played the non-Delirium-powered 1/1 Gnarlwood Dryad into potential Dead Weights, as I was never going to flat-out race the heavy control deck anyway. On turn 4, I should definitely have played either the Seed Guardian I had in hand or, if I played the Grapple From The Past, gotten back the Evolving Wilds, which was my original plan. I flinched, however, and took the second Seed Guardian I milled (which would be good against regular control, but not against Jelle’s exile effects), a terrible play on my part. Later in the game, I did not want to play Sidisi, Undead Tyrant to go get Emrakul, the Promised End (my best chance of beating him, even though I could not cast it yet), because I was afraid of Transgress the Mind. I should have gone for it anyway, as he only had one more Transgress, and there was no way of playing around it anyway. I lost to Sorin, Grim Nemesis quickly thereafter. Play bad, get punished. Justice. 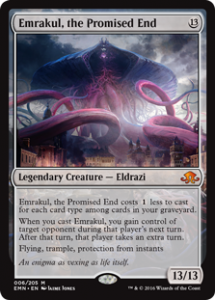 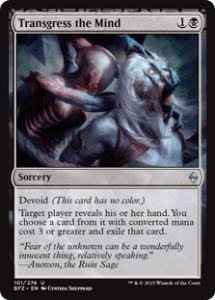 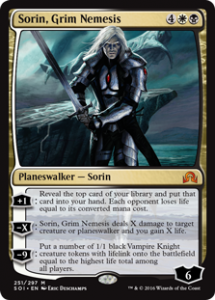 I boarded in the anti-control package of Duresses, Read the Bones, and Negates (for his Planeswalkers) for most of my removal.

In the second game, I kept a sketchy hand with two Swamps and a Liliana, the Last Hope. Turn 3 Lili on the play was likely to win me the game, which was enough for me to keep the hand. I considered the possibility of Jelle casting Duress in the first two turns, but figured that he might keep the Duress to force through one of his Planeswalkers later in the game, or at least keep them until a later turn, when I would have had more time to draw into powerful spells. I was‘t sure about this, but thought the upside outweighed the downside. He didn’t Duress me, but I also didn’t draw a third land until turn four, and when I did, it was an Evolving Wilds, allowing him to Nightsnare away my Liliana, leaving me with just a few random beaters. He then proceeded to draw an enormous amounts of lands, however, somehow leaving me in a slightly favourable position, with him at a low life-total and both of us topdecking. His deck then decided it had coughed up enough lands, and provided him with Sorin into Emrakul, sealing my fate. At 1-1, I now had to win 2 straight to make the Top 8. 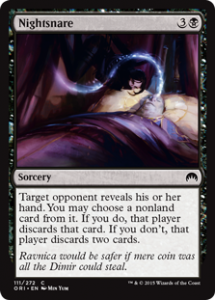 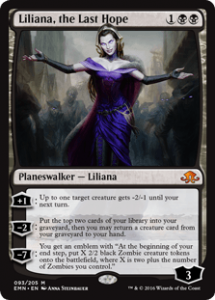 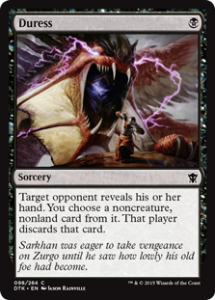 AN ASIDE ON ARISTOCRATS

Round 3 vs. Ian (GBx Aristocrats)

In Round 3, I found myself paired up against Ian (2-0), who had finished in the top 3 of the Ghent leaderboard for the second year running. Ian has been playing a Nantuko Husk deck for the past year now, so I knew what to expect. Ian’s build of Aristocrats has a neat little twist, as he is splashing for several off-colour Planeswalkers like Sorin, Grim Nemesis and Arlin Kord off of Holdout Settlement and Loam Dryad.

Ian was convinced he was going to lose, as he considered the match-up unfavorable for him. Having felt lucky to beat my brother, who was playing a GB Delirium deck reasonably similar to mine, the previous round, he was unhappy to now face me. We got a deck check in between games, so we had some time to discuss the match-up, which I actually consider close to 50/50. The keys are drawing timely Flaying Tendrils (or recurring them with Scuttler) and finding and casting Emrakul quickly, as it can be hard to force through your ground creatures in the face of the many blockers the Husk deck presents. If the game goes too long,Ulvenwald Mysteries will grind down your removal eventually, so it is important to play towards The Promised End aggressively. 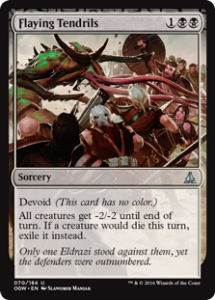 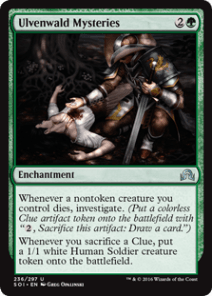 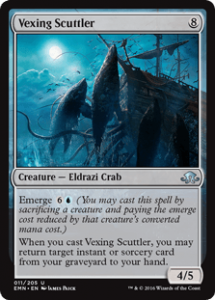 In Game 1, Ian kept a hand of all forests, alongside a Loam Dryad, a Blisterpod and a Sorin. When he played his third forest, passing without adding to the board, I figured I had to cut off his black sources and hope to manascrew him out of the game. As it turned out, he kept a hand with Sorin, hoping to draw a black source at some point. He didn’t, and I took the first game.

I boarded in Dead Weight and Caustic Caterpillar (for his Ulvenwald Mysteries), shaving some of my one-offs.

In Game 2, Ian had multiple Catacomb Sifters and Nantuko Husks, and I could not keep up.

After two uninteresting games (uncharacteristic for the match-up), Game 3 was a nailbiter, with Ian rushing out to an early lead with Catacomb Sifter and Nantuko Husk, while I worked hard to find and power out an early Emrakul. I managed to play it on Turn 7, at a precarious lifetotal, and with Ian having two Ulvenwald Mysteries in play. Taking his turn, his card for the turn was Voldaren Pariah. O-ow. Considering the number of creatures he had in play, my life total and my (exactly!) three creatures including the Emrakul that was going to win me the game, that was quite the problem. I attacked three of his four creatures into my board, giving him a bunch of clues, but also tying up his mana for a turn if he wanted to have enough creatures to sac to the Pariah. I made another mistake here, scrying a Vampiric Rites to the bottom for him, which I definitely should have left on top. His next two cards down were lands, which I had to scry down, leaving him with an unknown card on top. Saccing two clues to draw two and get four tokens, Ian found the land that would allow him to Pariah away my board on the next turn, meaning I needed to find another creature. Luckily, I did, allowing me to attack with Emrakul, sac my other creatures to the Pariah and attacking for the win with Big Momma Emrakul the turn after. At 2-1, we could both still make the Top 8.

Round 4 vs. Niels Vandevelde (GB Delirium)

With the winner likely able to draw into the Top 8 and the loser being out of contention, I was not happy to face my brother in Round 4. We actually discussed drawing so that we would both be in with a win in the final round, but we agreed that one of us making Top 8 for sure was probably better than taking the chance that neither of us did.

The round started with my second consecutive random deck check, which unfortunately netted my brother a game loss for a decklist error. Thinking that he was playing 3 Evolving Wilds in his original list, we had replaced a Swamp with the fourth Evolving Wilds the previous night. Unfortunately, it turned out he had already been playing four, and not having checked his decklist thoroughly enough, he brought a deck with 5 Evolving Wilds. Bummer. During the deck check, we discussed the match-up, which we considered to be slightly in my favour, but largely dependent on who finds their mythic rares first.

In the ‘second’ game, Niels got out to an early lead with some beaters, but I managed to stabilize, and Vexing Scuttler gave me the edge in the late game, getting me a Grapple with the Past that brought back an Ishkanah, Grafwidow which went on to take down Niels with a few activations.

I wasn’t happy to knock my brother out of the Top 8, but I ensured a spot for myself, barring an unlikely scenario.

…which you’ll have to read about in Part III. It also features frustrations, apologies, another turn seven Emrakul sighting and a new champion!

May you not be paired with family members in Top 8 contention,